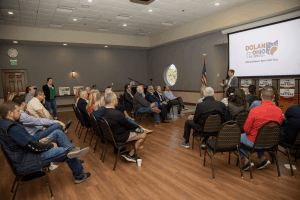 INDEPENDENCE, OH – This morning conservative Republican candidate Matt Dolan hosted his first campaign event in his bid for U.S. Senate. The following represents a rush transcript of Matt Dolan’s remarks prior to taking more than one hour of questions from the assembled crowd.

“I’m thrilled to be here.

“It was important to me that we start this event with the Pledge of Allegiance and the Star-Spangled Banner because we do stand for the flag. The flag stands for freedom.  It stands for independence. And it stands for America as the land of opportunity. (Applause)

“And so when we say, ‘Why is it such a big deal if we stand for the flag,’ it really hit home why it’s a big deal when I was watching the news and I saw 13 of our brave servicemen come back from Afghanistan who needlessly lost their lives. But every single one of those coffins was covered in an American flag.  And guess what was in those coffins? Men. Women. Black. White. Hispanic. The flag doesn’t distinguish between us.  The flag recognizes we are Americans (Applause)

“It was with humbleness that I embarked on a ‘listening tour’ over the summer to decide if I was going to run for the United States Senate. My passion, as my friends were nice enough to point out, is issues, policy, what is going to make Ohio better. And as I traveled the state, I learned that this race needs to be about Ohio and Ohioans.

“We need to get people back to work. We need people to be trained to work. We don’t need a federal government that is going to incentivize people to stay home and crush our work force. Ohioans want to feel secure. They want to feel secure at the southern border to make sure we know we are a welcoming country, and why wouldn’t you want to come to this country, but we ought to know who is coming into this country and what their intents are to be here. So, we need to protect our southern border and we need to make sure that we protect our neighborhoods and make sure that the men and women that serve us every single day in law enforcement; that they know that we respect them, that we know that we have their back, and we know that they are going to do everything that can to make our neighborhoods safe. And when you have a radical movement inside the federal government that says we are going to open our borders, and they’re actively saying that we’re going to defund the police, we’re not safe here in Ohio, or anywhere in our country.

“I also learned that Ohioans want a problem solver. We have enough bomb throwers. We have enough people who go on Fox News and give a litany of problems, but we don’t have people who can solve those problems. So, as I listen to them, and I’ve traveled the state, it became very clear to me what I needed to do.  And what I wanted to do. I made the decision very recently to announce that I am running for the United States Senate to represent Ohio. (Applause)

“Now, if you imagine that was a difficult decision and it was not made alone. I’m fortunate to have my wife Jessica here. (Applause)

“Not only is she my wife, and I love her, but we also spent a lot of time over the summer talking about whether I should be here or not. And it also helps that she’s has a Master’s degree in political science…(Laughter) so it wasn’t just a, ‘Oh you’re a great blah blah blah,’ it was really ‘Hey, can you win? Let’s talk about how you’re going to win, where your vote is going to come from,’ and ultimately you don’t make a decision like this unless you have family support. So, Jessica is fully on board. She knows what it is going to mean. My two sons, Sam and stepson Max are fully on board, they may not know exactly what it means (laughter), but they’re thrilled that we are doing this. So, family would have to come first, just as it does for so many in our state every day.

“Now, I want this to be a conservation, so I don’t need to spend all of your time talking about how in eight short months, President Biden’s agenda is destroying our country. And if you know me, and a lot of you do, but I’m not usually for hyperbolic statements.  But the reality is what has happened over the last eight months is putting us on a path where our economy is in danger. Our education system is in danger. Our quality way of life is in danger. And unfortunately, America abroad and those men and women who serve us are in danger because of the way Joe Biden and Democratic majorities are running our country.

“We have Tim Ryan and we have Sherrod Brown in Ohio supporting that agenda. So, I get everyone in this race is about stopping the Biden agenda. We should and we must. There is no question and there probably won’t be a sliver of daylight between me and my opponents on recognizing the problems. Why I’m running and why I’m different, and why I am going to win, is because I’m the only one that’s talking about how we are going to be for something, where we are going to stand and be a leader, and be a voice of what we need to bring Republican principles back that will improve our economy, improve our education, improve our quality of life, and make the United States strong. Because we are going to need strength. We are going to need strength to stand up to China, to make sure that Americans have jobs.  To make sure that we recognize that their agenda is not our agenda and where we have an opportunity to show economic strength, we need to show it. Where we have an opportunity to show our allies we have your back with military strength, we need to show it.

“We’ve got to actually send somebody to Washington who gets things done. I’m proud to run as a Republican. But I’ve got to tell you, when we controlled everything in 2017 – we had the White House, we had the Senate, we had the House – we didn’t get enough done. The reason we didn’t get enough done is because we were looking inward constantly.  President Trump put a southern border plan together that worked.  It protected our border. It recognized who is coming into our country. And we had stability.  Unfortunately, that didn’t become law. So, he had to do it by executive order. And you know what happens with executive orders – January 2021, that was gone. Now, we have a border crisis.

“That’s why you need to send me to Washington because I know how to get things done. I know how to be the person that identifies the problem and works towards a solution so that Ohio and our country becomes great.  We need folks to focus on our economy to make sure that what I’ve done in Columbus – I’ve lowered your taxes. When I got Columbus, my family. I also understand what businesses need to survive and the five pillars of business are taxes, regulations, energy, workforce education, and infrastructure. The one thing that was grossly out of place was our taxes. When I got to the legislature, our tax rate was 7.198%, our highest marginal rate.  As of our last budget that Jay and I worked on, is now 3.99%. (Applause) I want to accomplish for America what I have done for Ohio. I want to engage. To achieve conservative reform and get results. I want to put Ohio – our people, our interests – front and center. (Applause)

“So, when you talk about going to Washington and getting things done, I’m the one that’s gotten stuff done. If you look at our regulation – President Trump put in what some deemed controversial – that for every new regulation, you had to get rid of two because there’s nothing that binds businesses in economic growth than government restricting what you want to accomplish. So again, Jay Hottinger and I in the Senate took the lead on this, we were the second state in the nation to put into law in Ohio, that if we are going to put in a new regulation, two are going to leave.

“So, my attention, of course, would be to accomplish what I have done in Ohio, to be the leader and go to Washington and engage. There’s a lot of talk about fighters in this race.  Everyone says they’re a fighter. But in order to fight, you have to be engaged. You have to be willing to engage with the other side. And sometimes the other side is the Democrats.  And sometimes the other side is your own party, like in Ohio, where we control the governorship, we control the House, and we control the Senate by supermajority. So as Mayor Perciak mentioned, I’ve been fortunate enough to the Finance Chairman in the House three times and each time we work out a budget that gets passed by all Republicans and some Democrats, which means that you can put forth an agenda for Ohio that is economically conservative that reflects important investments – that is education, that is clean water, that is the foster kids, that is mental health, that is our veterans and that’s our police.  And yet you can cut taxes and cut regulations at the same time. That’s what we have done and I have gotten both parties to have that agenda and that’s why Ohio is growing. So when I say I am going to fight, it’s not just a banner, I am going to engage. (Applause)

“It is a little humbling to say you’re going to run the United States Senate. So, if you’re kind of like me – one of my social studies teachers my sophomore year of high school said ‘pay attention to what you like to read, and that will direct your career. Well, I liked reading about sports, and I liked reading about history, politics and government.  Talent, or a lack thereof took care of the sports side of my career. (Laughter)

“But to stand here today knowing as a kid I used to read about what happens in Washington and think that you’re going to be running for the United States Senate is humbling.  But I also believe that this is, as we all believe, this is the greatest country on earth.  And to be a great country, you’ve got to be a leader. You’ve got to be a leader in how we conduct ourselves, you’ve got to be a leader in what we produce, and we need to be a shining city on the hill again, and my goal to go to Washington would be to make the United States the strongest economically, the strongest militarily, and the strongest moral country in the world.  And with your help, we are going to win the Republican primary in May, I’m going to win in November, and we’re going to begin serving you in January and I will always go to Washington – after earning your vote – knowing that Ohio is the greatest state in the greatest country in the word.

“Thank you so much for coming out.” (Applause) 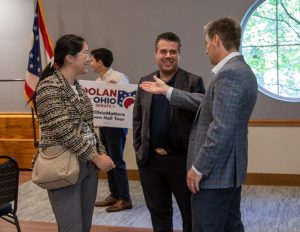 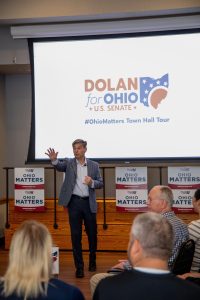 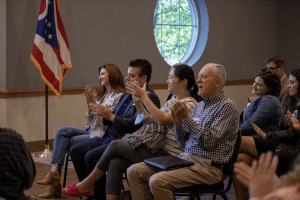 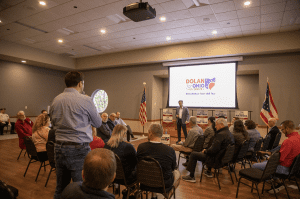 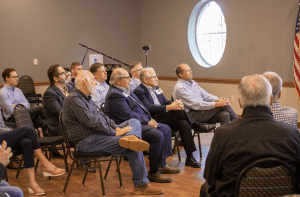 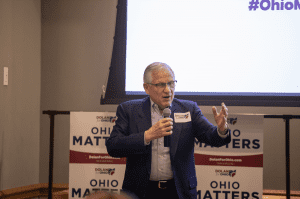 Matt Dolan’s next #OhioMatters Town Hall will take place in the Mahoning Valley on October 13. To request an interview or more information on Matt Dolan, please contact press@dolanforohio.com.