State Senator and conservative Republican candidate for U.S. Senate Matt Dolan was named a 2021 “Champion of Business” by the Ohio Chamber of Commerce. This is the latest in a long list of notable accolades Dolan has received from business advocacy groups due to his sterling record of results which have bolstered the free market and ability for Ohio business owners to create jobs. This achievement also clearly sets Matt apart from the field of prospective Republican candidates for U.S. Senate as someone who a proven conservative with both a public and private sector track record of success. 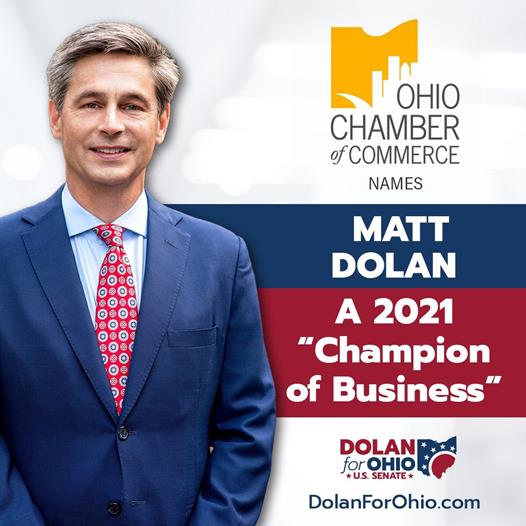 “At a time in which our national economy is under attack by the flawed and failed policies of the Biden Administration that empower government at the expense of America’s job creators and the free market, it’s critical that we elect conservative leaders capable of offering more than empty words and promises. I have routinely received accolades and endorsements from Ohio business advocacy groups because I have a record of getting results. I have successfully worked to cut taxes for every Ohioan, streamline government, and reduce regulations. I will bring that same approach to the U.S. Senate.”

As Chairman of the Senate Finance Committee and member of Republican Leadership, Dolan was instrumental in authoring and helping to pass a balanced budget this year that provided across-the-board tax cuts for every Ohioan, consolidated state tax brackets, empowered the private sector, helped to drive Ohio’s economic recovery in the midst of the pandemic, expanded school choice and increased funding for local law enforcement.

Further, Dolan has been credited with other major accomplishments during his time in the State Senate:

Learn more about Dolan’s campaign for U.S. Senate at www.DolanforOhio.com.