Conservative Republican candidate for U.S. Senate Matt Dolan was a guest on The Hugh Hewitt Show this morning where he discussed his support of the Constitution, the benefits of targeted infrastructure for Ohio and the need for enhanced border security. 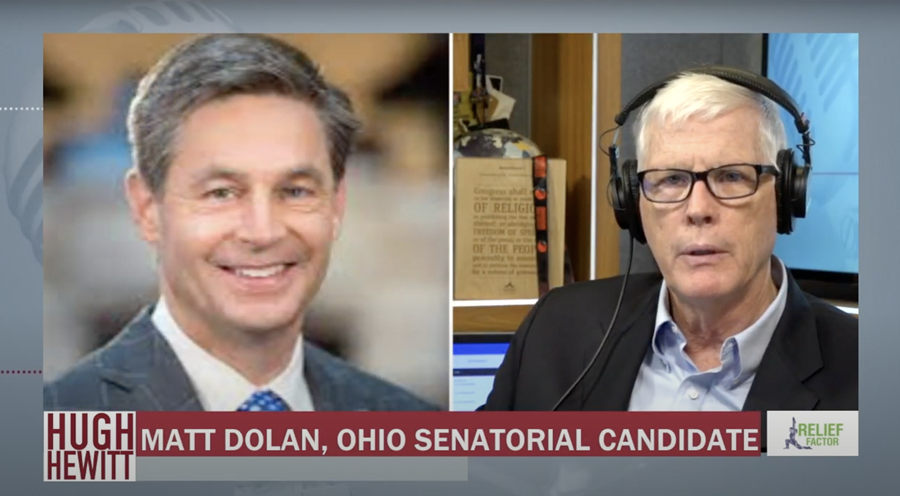 You can view and listen to the interview by clicking HERE.

Matt Dolan on the constitutional legitimacy of the 2020 election

“On January 6th, the Constitution required the Congress, the Senate and the House, to certify the election. So, I don’t know how if you can claim you’re a constitutionalist and you’re following the strict letter of the law, you couldn’t, [if] you [didn’t say we] needed to certify.”

Matt Dolan on the clear benefits of the targeted infrastructure bill negotiated by Senator Rob Portman:

“I like the infrastructure bill negotiated by Rob Portman. And I’m the only candidate on the Senate side who supports it…

“If you’re in Cincinnati, and that Brent Spence Bridge finally after years of both Democrats and Republicans saying we need to fix it, finally it’s getting done. Those are significant jobs that will pay off in the short term, six to ten years of the work. But then, think about all of the economic development that the bridge brings. 3% of our GDP goes across it.

“The same with Appalachia. If you’re in Southeast Ohio and you say you’re for economic development, which I am, I’m the only one that can look them in the eye and say I supported your broadband, because that’s going to bring tele-health. That’s going to bring education and jobs to the area.

“You know, it’s all over the state. Dayton with their public transportation, Cleveland with our rails and our ports, Columbus with I-70 and 71. I mean, you’ve been in Columbus. You’ve sat in that traffic. You know how debilitating that can be to the economic growth.”

Matt Dolan on the need for enhanced border security to combat the flow of fentanyl into Ohio:

“I’m not one for big hyperbole. But what I know is happening right now is fentanyl is coming into the state of Ohio because our borders are open. And if we don’t address that issue, it’s going to be a never-ending battle with these opiate deaths. We’ve got to secure the border, and the Biden administration has allowed this border crisis to happen.

You can view and listen to the interview by clicking HERE.