On Sunday evening, conservative Republican Matt Dolan participated in the Center for Christian Virtue Debate moderated by Hugh Hewitt and Aaron Baer in Westerville. On a range of issues, including the U.S. Constitution, states’ rights, infrastructure, and China, Dolan once again distinguished himself from the rest of the field:

“Dolan, whose family owns the Cleveland Guardians, distinguished himself from his opponents right out of the gate. He supports the bipartisan infrastructure deal negotiated by Portman and has opted not to run a Trump-centric campaign, even drawing rebuke from the former president over the baseball team’s name change. The other candidates, by contrast, have sought to align themselves with Trump and are clamoring for his endorsement. The state senator doubled down on those differences during Sunday’s forum. When his opponents blasted the Equality Act, Dolan said he would support a provision that bars discrimination in employment based on sexuality or gender identity. He touted school choice when asked about issues facing children instead of railing against critical race theory. Dolan also said he would’ve voted to certify the Jan. 6 election in compliance with the U.S. Constitution.

“‘If you haven’t figured it out by now, I’m a pretty practical person,’ Dolan said. ‘Sometimes tonight I felt like a Browns fan in Pittsburgh’s stadium’.”

“The Republicans running for an Ohio U.S. Senate seat next year shared similar views on Sunday night at a candidate forum in suburban Columbus geared toward socially conservative, evangelical voters.

“Dolan presented himself as an experienced, practical politician who would get things done and attract independent voters in November. He is the only candidate supporting the infrastructure bill negotiated by Portman, another position that didn’t make him popular with Sunday’s crowd. 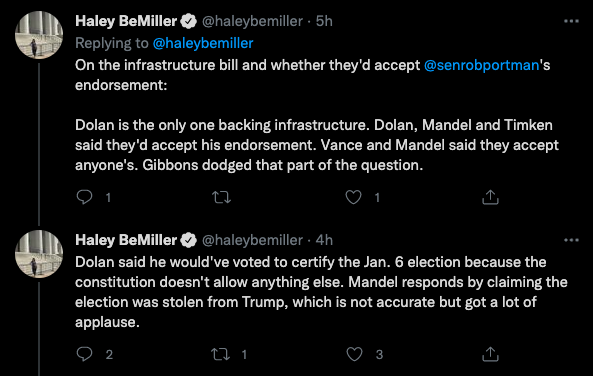