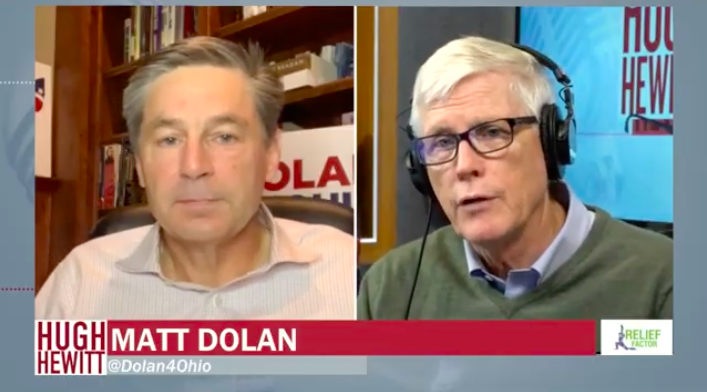 Conservative Republican candidate for U.S. Senate Matt Dolan joined Hugh Hewitt’s radio show this morning for a discussion on the recent CCV Forum and his support of vital economic issues that directly impact the quality of life of Ohioans. From standing up to China by championing the Great Lakes Compact, to investments in Voltage Valley and targeted infrastructure support for Ohio’s roads, bridges, rail and broadband, Matt Dolan is the only conservative candidate for U.S. Senate in the Ohio lane of the Republican Primary.

Below are some notable highlights from the interview: 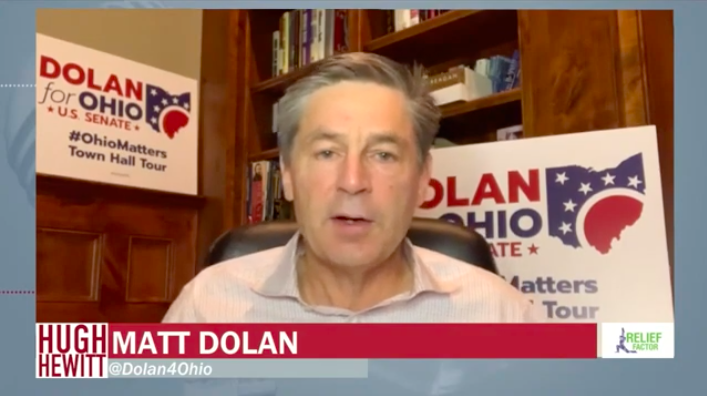 Matt Dolan: I would argue that I am in my own lane, and maybe my focus reflects Rob Portman, but there’s no one else besides me that has been singularly focused on the issues that impact Ohio more than me. … I am the only one supporting the infrastructure bill which brings tremendous relief and investment to Ohio, which is great for Ohio businesses.  I’m the only one in this race that is an elected official and has positive experience and results that I can bring Washington and reproduce the same thing.  So I think I’m uniquely qualified and I have my own lane in this race and everyone else is in the other lane.

Hugh Hewitt: You threw out a term at the debate which I didn’t know, and I had to go back and look up which is the “Great Lakes Compact.” I didn’t know what that was. I’ve always told people that when climate change really happens in a terrible, way you want to live in Ohio because we have a lake. Apparently, you figured that out as did a bunch of other people from the Great Lakes States and Canada. What does that do?

Matt Dolan: Hugh, in its simplest form it says that if you want to benefit from the Great Lakes waters, you better move and sight your business in the Great Lakes region because we are not shipping our water outside of this region. In 2006 when China was trying to strike a deal with a Minnesota company to ship Lake Superior water, the Great Lakes region got involved. I represented Ohio along with ODNR Director Sean Logan, who’s from your area by the way, in the Mahoning Valley, and we along with seven other states and two provinces of Canada worked really, really hard as you can imagine. That’s what being a legislator is —  getting together, figuring out what everyone’s needs are, finding out where we don’t agree, and producing a result which was The Great Lakes Compact, which is situating us perfectly because we are facing drought conditions, and sooner later manufacturers are going to say “I want to go where there’s water.” Which again, makes me uniquely qualified because when I go to the U.S. Senate, I’m going to know how important the Great Lakes regions are. Even though we’re losing clout in numbers, if I’m in the U.S. Senate, will not lose ​

Hugh Hewitt: I loved your line that you felt like a Browns fan at Three Rivers [Stadium]. Are you going over to FirstEnergy [Stadium] this weekend for Steelers weekend, Senator Matt Dolan?