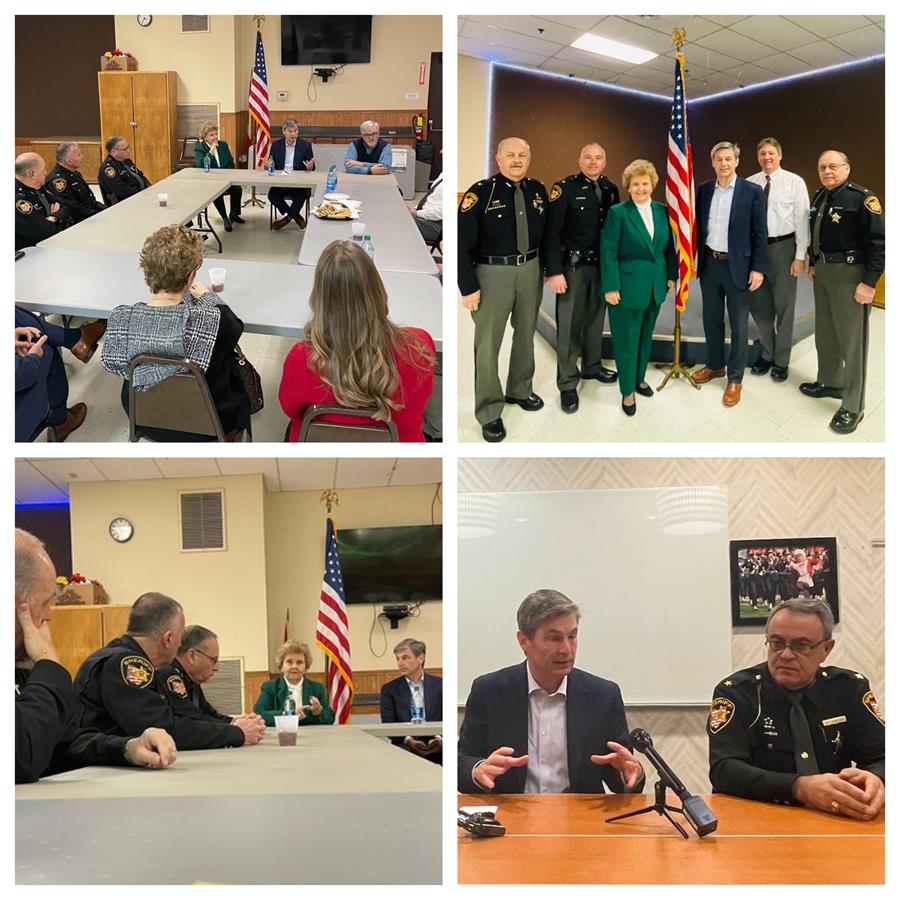 Chagrin Falls, OH – Republican U.S. Senate candidate Matt Dolan today announced the formation of the Ohio Law Enforcement Advisory Council. The group is comprised of law enforcement officials from across Ohio who have formally endorsed Matt Dolan’s candidacy for U.S. Senate. Members of the Council have endorsed Matt Dolan for U.S. Senate and also met in roundtable policy discussions in recent weeks. They will continue to advise Matt on policy issues and challenges confronting Ohio law enforcement and the federal solutions capable of addressing public safety, crime reduction, and mental health in the run up to the November election.

“As a former Assistant State Attorney General and prosecutor, I am honored to have the counsel and support of brave law enforcement personnel from across Ohio. Efforts by Democrats in Ohio and across America to demonize and defund law enforcement must be stopped. As a State Senator, I have made funding Ohio sheriffs and police departments a priority. In the U.S. Senate, I will oppose any effort by Democrats to restrain the ability of our nation’s law enforcement community to keep Ohio and America safe,” said Matt Dolan.

“The choice presently facing Ohio voters is one that carries ramifications for every city in our state and communities across America. As State Senator and a former prosecutor, Matt Dolan achieved a sterling public record and has never wavered in supporting Ohio’s law enforcement community. Time and again, Matt has provided Ohio’s sheriff and police departments with the funding and programs we need. He has also sought balance between protecting Second Amendment rights and supporting commonsense laws that keep our police officers and sheriffs safe on the job. Ohio needs Matt Dolan in the U.S. Senate. He will work for us, lead with sound judgement and will never hesitate to put Ohio’s needs first,” said Sheriff Vernon Stanforth.

“Matt Dolan’s substantive focus on the needs of Southwest Ohio and our state is impressive and stands out in the race for U.S. Senate. As a state legislator and former prosecutor, he has the professional background, the conservative track record,and experience to get results for Ohioans. I’m proud to endorse his candidacy to be Ohio’s next Senator,” said Butler County Prosecutor Michael Gmoser.

“Matt Dolan was instrumental in providing funding and resources for our law enforcement community. As a former prosecutor, he understands the tools we need to keep Ohioans safe. As our next U.S. Senator, Matt will work tirelessly to stand up for our police and first responders. That’s why I proudly support Matt Dolan for the U.S. Senate,” said Clark County Sheriff Deb Burchett.

“The issues impacting our state stem from challenges here in Ohio and across the country. That’s why our next U.S. Senator must have a firm grasp on how they can deliver real results to keep Ohioans safe. I’m confident Matt Dolan has the experience and focus on our

“Matt Dolan’s experience as a prosecutor and state legislator enhances his qualifications to be an effective U.S. Senator. Knox County will benefit mightily from having a public servant of this caliber fighting for us in Washington D.C.,” said Knox County Prosecutor Chip McConville.

“Public safety is my first priority. As a former prosecutor, Assistant Attorney General and legislator, I know Matt Dolan shares this focus. I’m impressed with his record and capacity for results. I endorse Matt for U.S. Senate because he will fight to keep Ohioans safe and always have the back of law of law enforcement,” said Knox County Sheriff David Shaffer.

“Matt Dolan doesn’t require on the job training to understand our state and important policies that will keep Ohioans safe. His career in public service has prepared him to the U.S. Senator that Ohio needs. I’m glad to stand with fellow law enforcement officials from across Ohio in supporting Matt Dolan for U.S. Senate,” said Licking County Sheriff Randy Thorp.

“Having taken the time to meet and listen to Matt Dolan, it’s clear to me that he will make a strong United States Senator. As a former prosecutor and experience state legislator, he not only understands the issues impacting law enforcement, but he also has a proven record of fighting for them. I strongly endorse Matt Dolan’s candidacy for U.S. Senate,” said Logan County Sheriff Randall Dodds.

“During his career, Matt Dolan has routinely stood in support of Ohio’s law enforcement community. From putting violent criminals behind bars to funding police and securing the resources we need, Matt can be trusted to get results that keep Ohioans safe. I am proud to endorse Matt Dolan to be Ohio’s next United States Senator,” said Mercer County Sheriff Jeff Grey.

“As a State Senator, Matt Dolan has supported funding for Ohio law-enforcement. As a former prosecutor, he’s had our back. I have spoken in person with Matt Dolan about the mental health crisis in our jails and in our communities. I am confident Matt will work with Sheriffs and stakeholders to address this very serious issue in the U.S. Senate,” said Wood County Sheriff Mark Wasylyshyn.